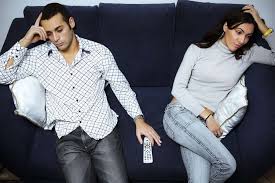 Divorce indicates a horrifying experience and situation which almost all societies in the world denounce.

In other words, we may describe divorce as end of marriage or death of marriage. Divorce is legal separation of husband and wife that brings an end to the married life as well as to the vows spouses took before sacred fire (In Hindu Marriages) and gathering of relatives of both the sides at the time of marriage. It closes the chapter of their marriage for ever. A promise the husband and wife made earlier to be loyal and faithful to each other forever is being broken. However, conditions and procedure of divorce differs from society to society, culture to culture etc.

Though number of divorce cases is increasing in Indian metro cities, but due to social and religious obligations, divorce rate is still quite low in India when it is compared with western countries. One important fact has been experienced by the experts in a latest study where it has been established that arranged marriages have lower rate of divorce as compared to love marriages.

Due to religious bent, family/social bonding and uphold of traditional values, divorce is still considered unwanted in India. Instead of running to the Courts for divorce, the elders of the families of both sides still prefer to sit together for mutual accord and sort out the differences mutually for wellbeing of the family. They preferably force husband and wife to sort out their difference and compromise to avoid the severe consequences of the divorce.

Legally, certain grounds have been notified by the Law for separation and ground of divorce under Hindu Marriage Act which includes any kind of sexual relationship outside marriage, cruelty and inflicting physical injury, conversion of religion by any one of them, mental or venereal illness, desertion by any of the spouses for at least two years etc etc. This is a long list indeed. This is very complicated procedure and lot of proof and details are required to get divorce through Courts. Grounds for divorce differ from religion to religion in India.

Western and advance countries have the highest rate of divorce. May be, the commitment and seriousness required for a stable married-life relationship is not so strong. Lack of social pressure and bent towards physical attraction may have contributed to this awful situation increasing alarming rate of divorce in those countries.

Whatsoever may be the reason, the higher rate of divorce indicates the lack of social, cultural and traditional values as well as insufficiency of mutual understanding and faith in each other. Such people consider marriage as fun and to be tried with.

Divorce is a horrifying state of affairs. Anyone of the spouse or both of them may or may not feel the pinch of divorce, but the children, if any, feel the worst impact of divorce during their life time. The innocents may never understand why their mother and father have separated. They feel the scar of negligence on their tender heart. They suffer the pain of being isolated by the parents. Most of them suffer from severe depression and stress. Emotionally they feel disturbed and they become prone to commit crime and develop personality disorders.

Father is considered rule-maker and discipline enforcing main figure in the family. In this context, it has also been observed that fatherless children easily fall prey to criminals and social elements.


Divorce affects both the parties financially and socially. Amount of income they had when as a couple generally dips down influencing children's education and their other activities. Lack of the father's presence greatly scratches the son's self-esteem and confidence. Daughter feels lack of protection in every field of life.

Though it is not difficult to identify who is responsible for the divorce. Whose behaviour or attitude and actions are accountable for the break of marriage? There may be lack of mental compatibility and thought pattern between the two. Or some habits or actions of anyone may irritate the other partner to such an extent that one has no option but to opt for divorce.

When both wife and husband fight to exercise their rights and have lack of tolerance and understanding, such situation arises.

In India, dowry system is also one of the reasons responsible for harassment of brides which often results in divorce. Though a strict law has been enforced in India to check the harassment cases of dowry yet misuse of this law in India is not uncommon.

Astrology has important role to play in such situation. In Indian Astrology, it is customary to match the horoscopes in advance before marriage. Marriage life problems can to some extent be avoided or reduced by matching the horoscopes of boys and girls in advance.

Mars, Saturn, Sun, Dragon's Head (Rahu) and Dragon's Tail (Ketu) have adverse effect on marriage if these planets are associated with seventh house or its lord. Particularly, Mars has very destructive role if posited adversely in a horoscope.

Apart from counselling, astrological help should also be taken from a learned astrologer to solve the married life problems which may have caused due to adverse placement of planets in the horoscopes. These remedies include mantra, yantra, gemstones and charity etc.

May God save the world from the curse of divorce.