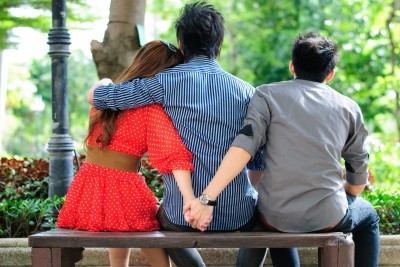 These days some relationships are packed with nothing but egoism, selfishness, distrust, disgust, ignorance and cheaters.

A very common complaint in married life is regarding cheating in love relations. Men or women both are suffering from this problem which sometimes turns ugly and become one of the main reasons for divorce.

Whatsoever may the reason but cheating is the break of trust. I know one couple whose married life was running very smooth. Both husband and wife had good understanding with each other. Suddenly husband was in need of some funds and he searched for his bonds and jewellery which he had kept in locker for the needy days. When he could not trace he asked his wife where about of these items. He was stunned to get the reply which he received from his wife. She had en-cashed these items without bringing the same into the knowledge of her husband to help her brother and parents. This is breach of trust and can be easily terms as cheating in relationship. Interestingly, husband himself was willing to help his in-laws.

In another case, wife having two grown up children was doubtful about the character of her husband. She blamed that her husband was in relationship with his assistant. Once, she saw both of them together and became suspicious. She tried to collect the evidence to prove her husband’s involvement but could not and always used to inquire her husband about late coming from the office. She used to create scene on this issue. One day, husband left the house and preferred to live separately. Though they have not sought divorce, but suspicious nature of wife destroyed the relationship and a sweet home. Children were the most sufferers. Actually, husband used to teach his office assistant and that was the main cause of his wife’s doubt.

There is a big list of such cases which one can notice easily in one’s surroundings. Wife blames her husband and husband blames his wife. No one is ready to find out the real cause and rectify the same. Result is broken relations and divorce.

There can be numerous reasons for discord in relations. One of my colleagues was in very good relations with his wife and was enjoying smooth marriage. Suddenly, the interference of his sister-in-law ruined the relationships. His wife was under influence of her sister who used to provoke her to live separately from family. Husband was reluctant because he was the only son and was not willing the leave his ailing mother behind alone. The relationships came to an end and the case is still pending in court for divorce.

In yet another case, one client came to me to know the fate of his married life. Interestingly, the man was in his fifties. His wife was in physical relations with her brother-in-law and she accepted this fact openly. For the sake of his grown up children and family circumstances he did not want to divorce her and is still living with his wife who cheated on him. Can one imagine the environment of such homes which are not less than a place called hell?

Who should be blamed for such situations is not an easy job. Both wife and husband have their own arguments, pleas and views which sometimes appear true and sometimes false. Ultimate result is “you entered my life, you betrayed me, now exit my heart.” Relations become soaring with heartbroken and life seems as useless, aimless and hopeless.

During Hindu Marriages, there is custom where both bride and bridegroom are supposed to honestly accept and follow some vows (vachan) throughout their married life. How many couples stay honest in respect of these vows? A few are honest while others fail to keep their words resulting in married life problems including cheating in marriage. Marriage is not the bed of roses only. Both, husband and wife are bound to perform certain duties and also equally responsible to upkeep the trust of each other. Marriage is also spiritual bonding as well.

Relationships, nowadays, are too focused on sex, ego and selfishness and not focused enough on sympathy, respect, love, teamwork and commitment.

Cheating usually comes with lies too. More a cheater lies about the cheating to cover up the involvement more he/she is in trap. This way lies get bigger and the trust gets more injured. One day limit is crossed with no trust and no faith.

Important question is that can one recover from the scars of cheating and loss of trust. Can the faith and trust be regained?

There is saying as, "If he cheats once, get help. If he cheats twice get out." But is this possible in the case of Indian societies which are mainly governed by some religious commitment and compulsions? Is it not strange that the partner who was cheated decides to remain with the spouse who cheated on?

In most of the cases, women decide to stay with their husbands and try to restore their marriage. Due to certain reasons women from all walks of life prefer to remain in a marriage bond even after they feel cheated on by their husbands. The reason may be children, sanctity of marriage or forgiveness. Women believe more in the piety of marriage and consider marriage a sacred bonding blessed by God.

Trust can hardly be restored and the spouse who is responsible for breach of trust must understand this fact clearly.

Services of some experienced Marriage Councilor must be availed to bring back the marriage on track. Patience and time is required specifically for the partner who was cheated and is in state of shock. The possible way out is to accept the truth and try to rebuild the relations only if the other partner cooperates.

Whether there is re-union or not, whether the trust is regained or not, a weeping, bleeding and broken heart will always say:

In Astrology, cheating in love relations can be observed from the malefic effect of planets on fifth, seventh and second house of a birth chart. Malefic planet like Mars, Rahu, Ketu, Saturn and Sun on these houses or on the lord of these houses may cause the break or misunderstanding in love relations. Afflicted Venus in a man’s chart and afflicted Jupiter in woman’s may also create this problem.

Horoscopes should be matched before marriage. Remedies, if any, in such situations should be performed properly. Actually, all these points should be taken in to account only at the time of matching the horoscopes of both i.e. before marriage. After marriage, if such situation arises, it is sometimes hard to rebuild the relationship even with the remedies unless there is some auspicious planetary combination present in the chart.